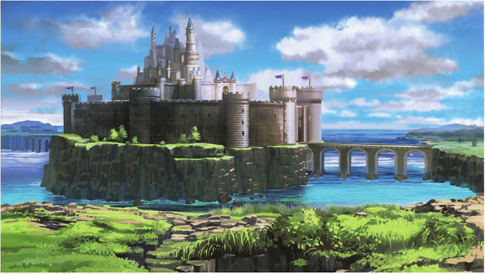 Baldea Castle before the events of Langrisser I

Baldea is a country prominently featured in the storylines of Langrisser I and Langrisser II. It is the home of the first game's protagonist, Prince Ledin.

The Kingdom of Baldea is a peaceful country located on the continent of El Sallia. It was originally founded by King Sieghart as the Kingdom of Ethlead, and soon became a kingdom guided by the Descendants of Light. The royal family of Baldea, watched over by the Goddess Lucilis, has safeguarded the Sacred Sword Langrisser for generations. Due to the efforts of its rulers, as well as those who served the crown, Baldea became a major power on El Sallia and prospered for centuries. During this era of peace, it appears that Baldea had generally amicable relations with the surrounding territories, including its ally, Salrath.

In Langrisser I & II, Baldea is represented by a blue and white vertical triband flag.

The events of Langrisser I begin when Kaiser Digos, the power-hungry ruler of the Dalsis Empire, launches a siege on Baldea Castle. Though Prince Ledin manages to escape in an attempt to gather reinforcements, King Illzach loses his life while defending the castle. Narm, the captain of the Baldea Royal Guard, later meets with Ledin in Salrath and informs him of Baldea's loss. Motivated by the death of his father, Ledin resolves to take back his home from the hands of the empire. Upon returning to the castle, Ledin and his companions liberate the castle from the Dalsis. The Royal Mage Jessica, now released from captivity, informs Ledin of Digos's true motive--to use the Sacred Sword Langrisser to conquer El Sallia.

Though Ledin is ultimately successful in restoring the rule of his lineage, the kingdom falls again in the years between the storylines of Langrisser I and Langrisser II. Approximately 200 years after the war, another siege on Baldea results in the death of the king and queen, ending an era of peace. Their young son, Prince Elwin, is rescued by Doren, a vassal of the Baldean royal family. The two are able to escape and take to a life of wandering, with Doren acting both as a father-figure and teacher to Elwin. After years of travel, however, Elwin's life is targeted again. Doren is able to protect him once more, but this time at the cost of his life. Motivated by Doren's death, Elwin sets out on a quest for revenge.

Elwin learns that Faias, a demon servant of Boser, was the one who slaughtered the Baldean royal family--and later claimed the life of Doren--in an attempt to extinguish the Descendants of Light for good. Faias reveals that during the era following the War of the Sacred Sword, the Baldean kings violently suppressed demonkind, even after Velzeria had surrendered.

It is later discovered by Elwin and his companions that the former site of Baldea Castle had been sunken into the lake by Jessica in an attempt to protect Langrisser.

The following are prominent characters relevant to the Kingdom of Baldea: