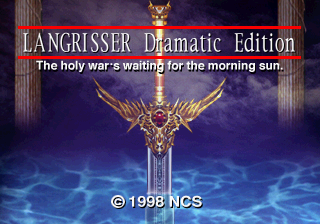 Langrisser is a tactical role-playing game developed by Masaya, the entertainment division of NCS.

It was initially released for the Sega Mega Drive with a later update on the NEC PC-Engine Super CD-ROM called Langrisser: Hikari no Matsuei. In all subsequent releases, the game was redesigned to use the new engine Masaya created for Der Langrisser.

The story follows the armies of Prince Ledin of Baldea in his battle against the Dalsis Empire and the Darkness it unwittingly awakens.