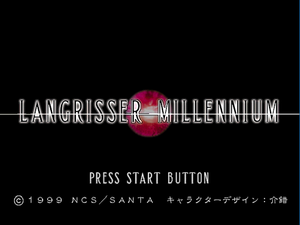 Title screen from the Dreamcast release

Langrisser Millenium is a tactical role-playing game developed by Masaya, the entertainment division of NCS and Santa Entertainment.

It was initially released for the Sega Dreamcast, but was later ported to Windows PC98.

The story follows one of five characters as they battle to unify the continents of Divernia and Illuminia, all the while an ancient evil lurks in the background.