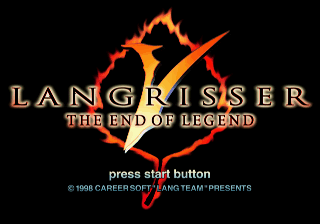 As Landius' battle was drawing to a close, a new story begins in the underground cloning facility of Gizlof's laboratory. A "clone," Sigma Σ-066, awakens during an attack by the Crimsonian Knights. But with the programming sequence interrupted, he never receives his "orders" from Gizlof.

During the attack, Sigma Σ-066 flees the facility with his fellow "clone," Lambda Δ-052, while Omega Ω-133 remains behind to be defeated by the Crimsonian prince.

They aren't out in the world for long before disaster strikes, and their master Gizlof is killed by Landius. Without their master to give new orders, the clones are left without purpose -- a situation that changes when they encounter Jessica on her way back to El Sallia.

A complicated plot draws the two into the story of Langrisser and the World Tree. The men from Crimsonia need Alhazard to power their ship and return home. With Bozel slain, a new leader rose through the ranks among the demons plotting to gain Alhazard to become a dark god himself.