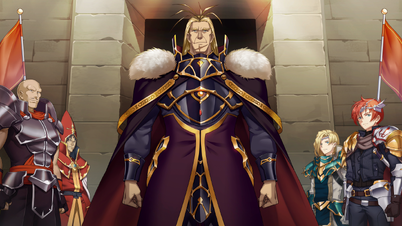 Kaiser Bernhardt and his generals

The Rayguard Empire is the dominant power of El Sallia during the events of Langrisser II. Ruled and founded by former mercenary Kaiser Bernhardt, the empire is known for its military might. Since its creation, Rayguard has invaded and subsequently annexed a number of surrounding nations. A rebel alliance, lead by the Kingdom of Kalxath, opposes imperial rule of the continent. Due in part to Bernhardt's charisma, as well as his skill on the battlefield, his rule has attracted a number of highly-skilled generals.

In Langrisser I & II, the Rayguard Empire is represented by red or white and red triband flags.