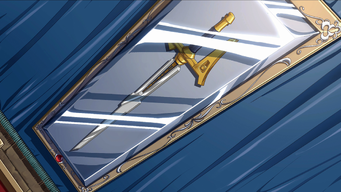 The Sacred Sword Langrisser is an ancient relic forged by Lucilis. It is a powerful blade originally created to oppose the Cursed Sword Alhazard.

At the time of its creation, however, it was still incomplete. In order to reforge the blade and seal away the darkness, King Sieghart of Ethlead sacrificed his life by binding his soul to Langrisser. Those present in this moment, later known as the Ancestors of Light, gained the ability to wield the blade. Their lineage, the Descendants of Light, would continue on as a force opposed to Chaos and the Forces of Darkness.

Many Descendants became rulers and servants of the Kingdom of Ethlead, later known as Baldea. Since being reforged, Langrisser was guarded within the walls of Baldea Castle for centuries, until the events of Langrisser I.