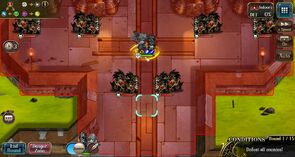 Position that will aggro all 3 groups

In the Training School, players fight a map of six enemies in order to obtain EXP potions that are used to grant units bonus experience. Higher levels of the Training School award higher rarity EXP potions that give more experience points. Once per day, you will receive a large bonus number of EXP potions for a successful clear. As with most content in the Secret Realm, it is possible to group up with up to two other players as a party to complete one of the maps. Completing a map with friends or guild mates in your party will award a small amount of extra EXP potions as well as Friendship Points. Each day the units change but the rewards do not vary depending on which enemies were fought. The enemy units on any given day are all of the same class type and the Training School only has a single map with a single set of spawn locations.

The enemy is broken into three groups of two. Walking into the danger zone of a member of one of the groups will cause the other one to aggro as well. Otherwise, the center-bottom group will begin to move towards the player on turn 1, the top-right group will do so on turn 2 and the top-left group will move on turn 3. All Golems have the Strengthened Priority talent which increases their priority effects and causes allied units with priority over them to deal normal damage.

It is possible to aggro all 3 groups on turn 1 by teleporting a unit towards the tile in the center of the cross pattern on the floor (see right).

Infantry Training is available on Mondays and Thursdays. The leftmost Infantry Golem of each group of 2 has the Slice skill, dealing 0.5x AoE damage around it. The rightmost Golem of each group has the Shroud skill which passively provides a 30% to reduce physical damage taken from a melee attack by 30%.

Lancer Training is available on Tuesdays and Fridays. The leftmost Lancer Golem of each group has the Overload skill which increases the Golem's ATK by 30% and its DEF by 20%. Additionally, it will deal 1.5x physical damage to the target it attacks. The buff lasts for 3 turns. The rightmost Golem of each pair has the passive skill Feedback, providing it a 50% chance to reflect 50% of the damage it takes from a melee attack.

Cavalry Training is available on Wednesdays and Saturdays. The leftmost Cavalry Golem has the Energy Store skill, granting itself a 2-turn buff causing it to ignore 20% of its target's DEF. The other Golem has the Booster passive skill which will increase its damage dealt by 10% for each space it has moved before combat, capping at 30%.

Demon Training is available on Sundays only. All 6 units are identical. They have the passive skill Interfere, causing 1 random debuff to be dealt to any unit that is dealt damage by the Demon Golem. This debuff lasts 2 turns.