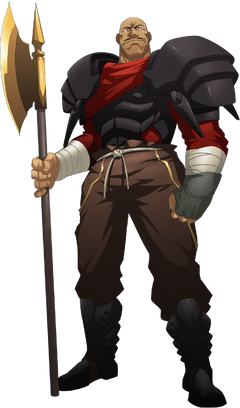 Vargas is one of the best tanks in the game and is often considered the 2nd best tank (after Ledin, King of Tanks). Despite only being an SR, when he is a Royal Vanguard, Vargas has the highest DEF stat in the game (not counting the limited collab character Estelle from Trails in the Sky) and is in the top 10 for total HP. Vargas even takes less Physical Damage when Troop HP is high, and he can also revive himself one per battle! If you need to tank Physical Hits, Vargas is your man. His only weakness is MDEF, which is the 2nd lowest value in game (Aaron has the lowest). Needless to say, keep Vargas away from magic and he will perform extremely well.

However, Vargas can not only tank. He can also deal out impressive damage due to his DEF -> ATK conversion skills (Unbreakable Guardian, Power Stab). As Vargas has some of the highest DEF in the game, all of those multipliers will add up and help him tank and deal damage even more. While Freya may deal fixed damage and can kill targets, Vargas just smashes his foes when his buff is active. Ledin is still King of Tanks because of his Talent allows him to attack twice, he has a better conversion skill [Divine Guard], and the fact Ledin can take and guard against Magic Attacks.

So, why use Vargas?

In short, if you need to tank Physical Damage, Vargas is there. It helps that Vargas can also dish out damage as well due to his conversion skills.

Now, what about Royal Vanguard (Lancer) vs Brave (Infantry)? Typically, Royal Vanguard will be preferred for pure tanking due to the higher HP and DEF, as well as being in the Lancer class to hold off pesky Cavalry units. However, Brave is better in every other stat (ATK, INT, MDEF, SKL) and despite being Infantry, Vargas' lancer soldiers may be able to deal with incoming Cavalry threats.

To choose between the two, the main question to ask is: "Do I want to be effective against Cavalry (Royal Vanguard) or do I want more MDEF (Brave)?" Royal Vanguard is more for the min-maxed physical tanks and to deal with Cavalry threats, while Brave is more well-rounded and can handle magic attacks better than the Royal Vanguard class.

So, what class to choose?

Personally, by default I would go for Royal Vanguard for tanking because of the Lancer type. Cavalry units are a pain to deal with due to their extra movement while Infantry and Mages can be sniped off as they approach. // Brave can be used for tanking as well, mainly trading cavalry effectiveness for a substantial boost to MDEF. Oh, and Brave is better for building an Offensive Vargas, but we'll get to that later.

Anyways, onto the guide!

None at the moment!